We’ve been representing the Asian hornet, Vespa velutina, in the I’m a Scientist, Get Me Out of Here 25 genomes competition. The 25 genomes competition has been run to celebrate the 25th anniversary of the Wellcome Trust Sanger Institute. Twenty species have been selected and members of the public, including school children, were voting for the final five species in the competition.

We’ve been championing the Asian hornet – a dangerous invasive species that poses a huge threat to bee populations in the UK and elsewhere in Europe.

We managed to convince people about the importance of Vespa velutina, the yellow legge hornet, whose genome will be now sequenced by the Sanger Institute!

THANKS EVERYBODY FOR VOTING!

See more info abnout the challenge and the species here:

THe news has also been covered here 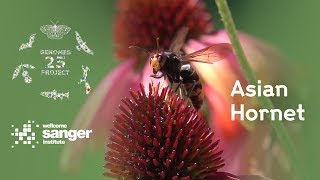 Press coverage by "The Times"!

New paper about the origin and maintenance of insular butterfly diversity